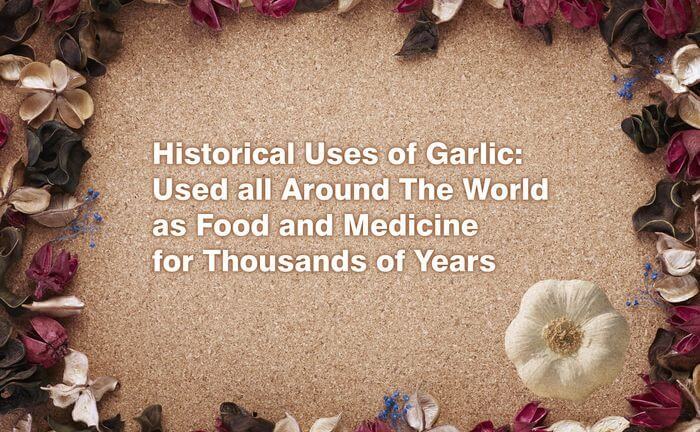 Garlic has been used as food and medicine for over 5000 years across various ancient civilizations.

First mentions of garlic in Mesopotamian civilization appear on the tablets from Nineveh (ancient Assyrian city of Upper Mesopotamia, located on the outskirts of Mosul in modern-day northern Iraq) in a recipe written down around 3000 BC by Sumerians.

They mixed it with their wine and consumed it as a tonic for strength. They also mixed it with herbal teas to cure / prevent infections and diseases.

Read more on: How garlic can help you gain strength?

Around the same time as early as Mesopotamian records, that is around 5000 years ago, mentions of garlic appear in the Ancient Indian Sanskrit language text, on how garlic can cure conditions like cold, coughs, indigestion, lack of appetite, fatigue, constipation, skin diseases, worms, weak digestion, tuberculosis, leprosy, epilepsy, etc.

In the Vedas (Indian holy scriptures) – garlic has been mentioned with other medicinal herbs / plants.

The interesting fact is that even the modern science has verified some of the benefits of garlic, and its potential antiviral, antibiotic, blood thinning, anti-atherosclerotic, anti-cancer properties.

Garlic was mainly used by poor and working class population as a tonic to build strength, ward of diseases, and add taste to their otherwise insipid food.

Garlic was so much in demand by the working class that there are records of work stoppages when their rations did not include enough garlic.

Holy Bible mentions Garlic as a common food in Egypt.

Especially the Jewish people must have been very fond of garlic, because when they left from Egypt with Moses, it is written that they missed “the fish. the cucumbers, and the melons, and the leeks, and the onions and the garlic” (Num. 11:5) (R)

Greek army leaders fed garlic to their soldiers before battles.

It was used for various purposes:

Armies in Ancient Rome marched from one place to another, that made them vulnerable to various infections, diseases and digestive distress, as they lacked the antibodies required to fight the pathogens in their new surroundings.

Thus, they used garlic to ward of such maladies, as garlic is an antibiotic and also has immune boosting properties.

Garlic mixed with wine and other herbs was also used as a tonic to provide strength.

A mixture of garlic with wine was also used to disinfect and clean the wounds of the soldiers.

Evidence suggests that Gladiators chewed on raw garlic before entering into the arena for combat.

1. Historical Perspective on the Use of Garlic

2. Extracts from the history and medical properties of garlic